I thought I had finished this painting back in December, 2014.  I posted it on Facebook at the time, feeling it was done and it has hung in my studio ever since.  Although there were many opportunities to show this painting, it somehow never made the “final cut”.  I made a mental note that something more needed to be done.   I am getting used to this, of course, as any reader of my previous blog posts will know.  I do have a habit of falling in love with details and this one had some areas and marks I really liked, but the piece as a whole looked weaker as time went on.  I know some people may love this encaustic as it is, but I’m not happy with the surface quality or composition.  Since I don’t feel happy with it the way it is, it’s worth the risk to lose it.

Today, this piece went under the “chopping block”.  The first thing I did was apply a coat of semi-transparent white encaustic wax.  Next, I textured the surface with a lot of different tools.  Although I have an idea in my mind of what I’d like to do with it, the painting is already beginning to take on a life of its own, and the idea I had may fall by the wayside.  I need to remain flexible, observant, and ready to seize an opportunity if it presents itself, i.e., listen to what the painting is telling me to do.  Here are some process photos of some of the many changes this painting is quickly undergoing.  I will keep adding images as things progress so if you’re already horrified, just wait!  It could get a lot worse (and probably will, before it gets better!). 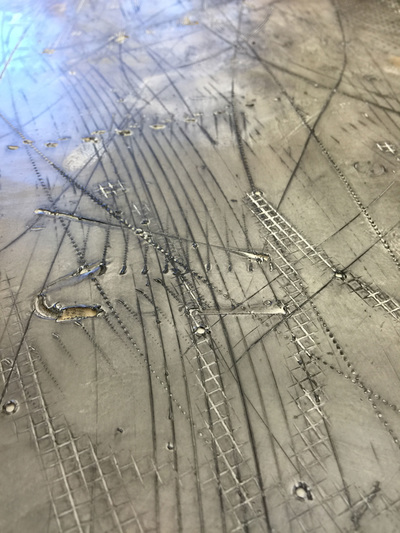 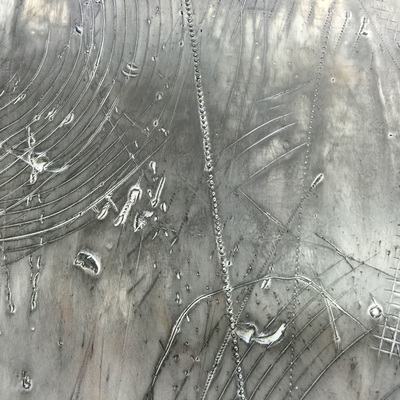 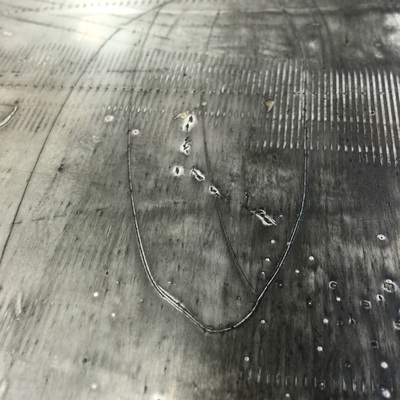 After the semi-transparent white layer was applied, fused (heated) and scraped, I used various texture tools to achieve the lines and gouges. Next, I chose graphite grey pigment stick and rubbed it over the entire surface and then used a razor blade to scrape some of the graphite grey away.  It is important to remove the majority of the pigment stick paint, since it contains a high concentration of oil paint which is not compatible with future layers of wax.  After the pigment is scraped, a paper towel with vegetable oil is used to remove even more pigment.  The surface is then ready to be fused once again.
End of day one of “redo”.  As you can see, a bit of warmth from the original painting is showing through.  Time for a break – what’s next?
Only time will tell– stay tuned :). I welcome your feedback so feel free to post comments and/or questions! 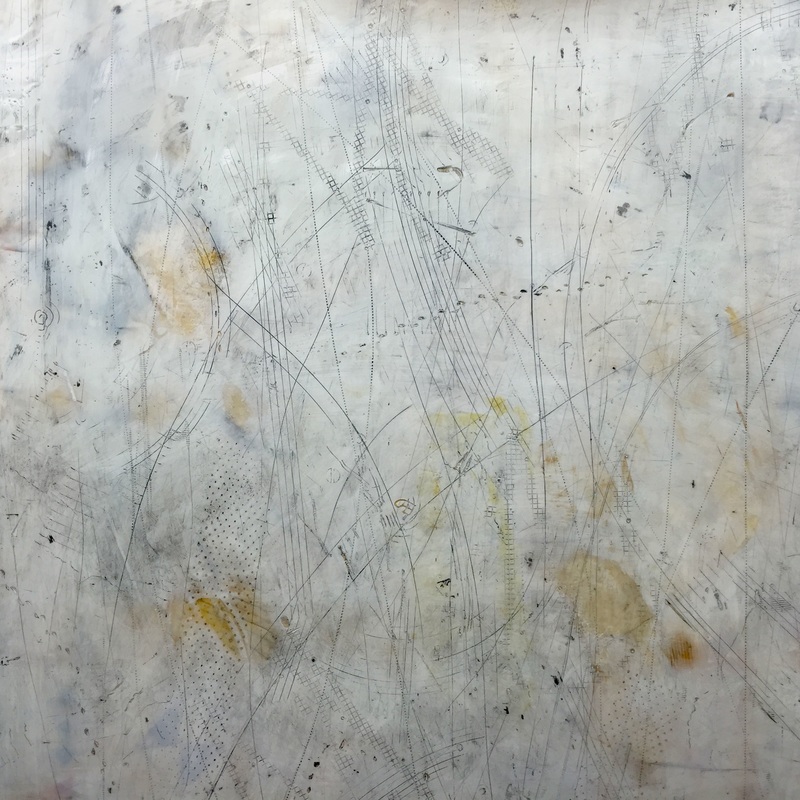 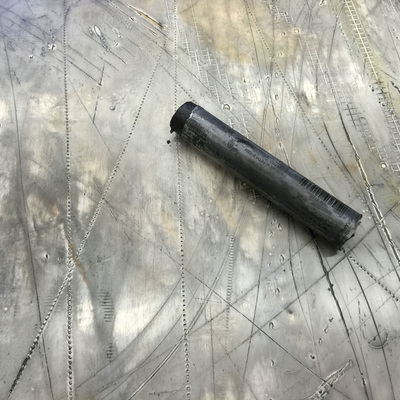 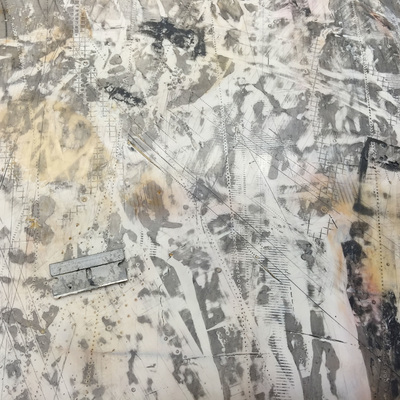 Day 2 of Re-do: I spent a lot of time staring at this painting today.  There was a lot of texture, but so far, no real design so I needed to ask myself the best way to proceed given the majority of thin, curvilinear lines and warm tones showing from beneath the overall cool white semi-transparent glaze. In order to end up with a stronger painting than the original painting beneath the surface, I wanted to use mostly encaustic paint, some graphite transfer paper, some R&F pigment sticks for glazing, but minimal pastel.  The pastels are nice and compatible with the encaustic, but in the previous painting they looked weak and dull.  I also wanted to focus on a majority of grayed hues, with minimal color saturation.  Given the surface was high key, I slowly proceeded to play with the pigment sticks and some graphite powder to put in my darks and mid tones.  Here are several photos which show the decisions I made.  I think it’s almost there. 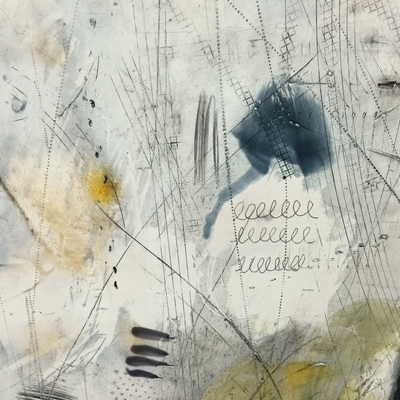 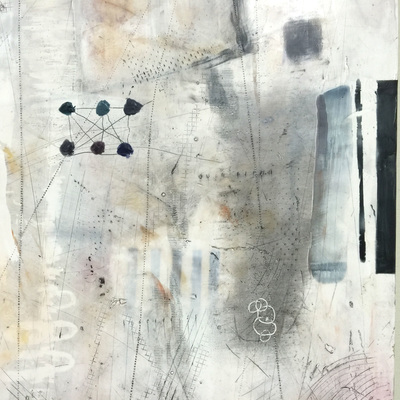 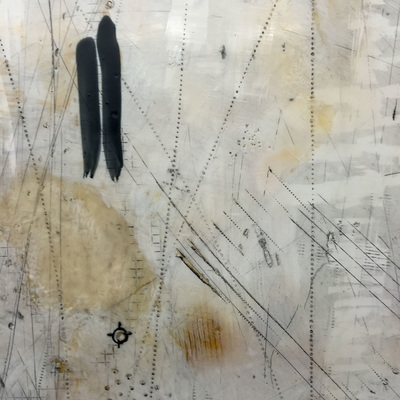 Upper Left: Indigo blue encaustic paint, graphite lines, and a bit of alizarin orange pigment stick.
Upper Right: With the ventilation going, I used a bit of Gamblin solvent to remove a bit of the white, revealing a bit of what was below. One of the last things I did here was take a sharp, curved tool to gouge out the circles which are over the mid-tone grey area.  The mid-tone grey is graphite grey pigment stick.
Lower Left: I had originally used graphite grey pigment stick over the white after it was highly textured to enhance all the marks.  The majority was removed, but the haze was still there but it’s very light so the overall value is still very light.  Nonetheless, when scraping, the thin grey is removed revealing the brighter white beneath.  I tried to use this effect strategically as I added various darks and opaque and transparent glazes.
Lower Right: At first, I wasn’t thrilled with the yellow and greenish grey shapes, but after rubbing a bit more graphite grey over the top and removing it, I added the dark vertical dark, and later, the bit of red, which can be seen a little better in the whole painting. 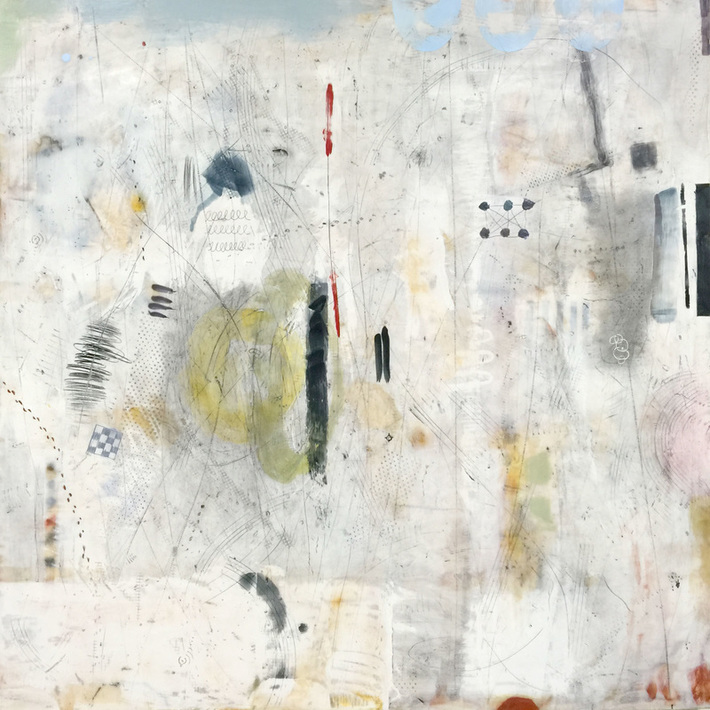 At the end of the Day 2 Re-do, here is where it’s at.  I’m feeling pretty good and think it is fairly close to being finished.  You may wonder why I like this version better than the original, or have many other questions about what I am aiming for or thinking about.  You may even question whether I am thinking at all.  Obviously, I’m not after perfection, beauty, or anything highly rendered but rather, emotion, sensitivity, push and pull, and evidence of the artist’s hand.  Basically, I want to FEEL something when I look at my work, and I hope the viewer will feel something as well.  I want the painting to stand from a distance, but create a lot of interest up close as well.  Repetition is what brings unity to any painting; here, I’ve used line throughout: thick, thin, curved, straight, dark, light, etc.  The painting is now predominantly cool, with a bit of warmth for contrast.  Small details permeate throughout the work and are personal to me.  I love circles and dots, so in this painting there are large loops, dark solid circles, and incomplete circles.  I would say there is more opacity than transparency, and I held back with highly saturated colors until the end.  Can you tell what I used?  Cadmium red, of course!  This is one of my favorite colors but it is only used to draw the eye toward the area of most interest, which is where the lightest light is next to the darkest dark, which is further strengthened by bits of detail in this area, i.e. the tornado graphite line, checkerboard, and vertical line of subdued dots.  The palette is simple and minimal.  The “bones” of the painting are now in place; I don’t think anything major is needed, just some fine tuning. What do you think?  I welcome your feedback and comments.
Menu
This website uses cookies to improve your experience. If you continue to use this site, you agree with it.
Ok